The South Park Game Wiki
Register
Don't have an account?
Sign In
Advertisement
in: Characters, Adults, Bosses,
and 11 more

Former Vice-President of the United States

Adults
Albert Arnold "Al" Gore, Jr. (born March 31, 1948) is a character in South Park: The Stick of Truth. He gives the player three side quests.

Al Gore has green pants and a light blue dress shirt with the sleeves rolled up and a red tie. He has a gold watch on his left wrist. He has styled brown hair and his face has wrinkles from age. When the player encounters Al for the first time, he'll be wearing Groucho glasses, as a disguise. When engaging Al in battle, he'll tie a red cape around his neck. When battling Al Gore for the second time, he'll wear a ManBearPig suit.

Al Gore gives you the ManBearPig quest and makes you put sensors in various locations around South Park to detect if ManBearPig is in South Park. Upon finishing this quest, he begins to spam the New Kid's Facebook wall and then the Unfriend Al Gore quest begins.

Al Gore assumes that the New Kid is really ManBearPig in disguise because he didn't reply to his messages and attacks. He is later found dressed up as ManBearPig outside the Church and, after being defeated again, remains unconscious outside of the Church for the rest of the game.

Al Gore hiding behind a tree. 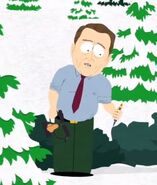 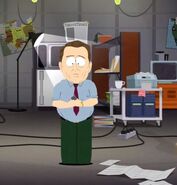 Al Gore at his base. 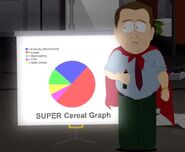 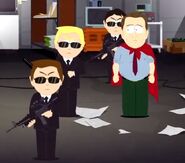 Al Gore and his secret service. 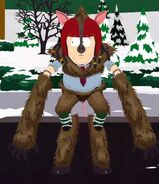