The South Park Game Wiki
Register
Don't have an account?
Sign In
Advertisement
in: Aliens, Enemies, Characters,
and 8 more

Aliens
Alien Guards are enemies in the Alien Abduction quest.

They have the long, thin, white bodies of all aliens, but they also wear police hats and a uniform. They also carry a space taser.

Perfect Dodge Stance - For a couple turns, the Alien Guard cannot be hit by normal attacks and can only be damaged by abilities.

Space Taser - A single hitting attack that inflicts Attack Down if not blocked.

They are guards on the alien spaceship that abducts the player. They patrol the spaceship and fight the New Kid whenever they encounter him.

Alien guards on the spaceship.

Alien guards with another alien.

An alien guard in the "Dodging" stance. 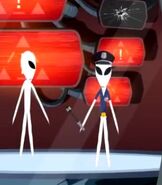 An alien guard near the last console.
Community content is available under CC-BY-SA unless otherwise noted.
Advertisement