The South Park Game Wiki
Register
Don't have an account?
Sign In
Advertisement
in: Enemies, Bosses, Villains,
and 10 more

The Alien Pilots are two bosses that appear in South Park: The Stick of Truth.

The Alien Pilot and the Alien Co-Pilot are the commanders of the U.F.O. that abducts the player. They appear at the end of the quest Alien Abduction. They attack the player on sight as he reaches the cockpit. When the Alien Pilot reaches a low amount of HP, he runs away leaving his hat behind, causing the Alien Cockpilot to put on the hat and activate an attack named 'So Be It'. When they are defeated, the U.F.O. loses control and crashes to Earth, causing the green goo to leak out of it and into the drains of South Park. 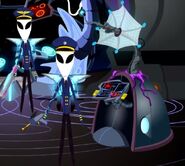 The alien pilots with their alien defense matrix.
Community content is available under CC-BY-SA unless otherwise noted.
Advertisement