The South Park Game Wiki
Register
Don't have an account?
Sign In
Advertisement
in: Game only characters, Friendable Characters, Girls,
and 7 more

Girls
Allie Nelson is a minor character in South Park: The Stick of Truth.

Allie has two hairstyles, shoulder-length, reddish-brown hair, and light brown hair in a ponytail. She usually wears a purple shirt.

When the New Kid is asked by Kyle to recruit the girls to join their side, he finds the girls preoccupied with the rumors going around town that Allie Nelson was spotted at the abortion clinic. Allie vehemently denies the accusations. After the New Kid completes the girls' quest and discovers that Heidi Turner was the two-faced bitch, she is very grateful to him for clearing her name.

Allie in the back row with the other girls, looking at the translated records. 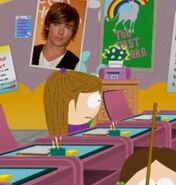 Allie with a different hairstyle at the girls' hideout. 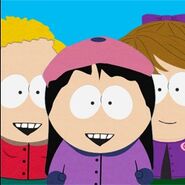 Allie and the girl's in their original friend icon.
Community content is available under CC-BY-SA unless otherwise noted.
Advertisement