The South Park Game Wiki
Register
Don't have an account?
Sign In
Advertisement
in: Characters, Minor Characters, Humans,
and 12 more

Kupa Keep or Drow Elves depending on player choice

Bill Allen is a character in South Park: The Stick of Truth.

Bill has brown hair and wears a brown coat with a black belt and a beige cape. He also wears brown mittens, dark gray pants and black shoes. 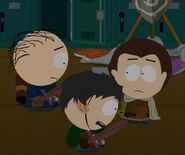 Bill with Fosse fighting a Drow Elf during "Attack the School".

Bill with Fosse during "Attack the Show".

Bill fighting in the background during "Beat Up Clyde". 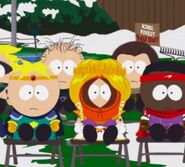 Bill with Fosse during Kyle's presentation.