The expansion pack can be purchased as a stand-alone DLC,[2] or installed for free if the Season Pass for the game is purchased.

Bring The Crunch focuses on investigating the mystery of the missing camp counselors of Lake Tardicaca, where Fastpass (Jimmy) dispatches a distress signal to The New Kid for assistance on the matter.

A new superhero class (Final Girl) is introduced in this DLC, as well as new items are included in line with the DLC's survival horror theme.

For the walkthrough of this DLC, refer to the page Bring the Crunch (Mission). Apart from the storyline, the DLC also includes 6 side missions known as the "Badge Missions".

Similar to the previous story-oriented DLC, the player will receive no free items; they will have to be discovered and acquired throughout the course of the whole mission. The following list shows the items obtainable in this particular expansion pack of South Park: The Fractured But Whole: 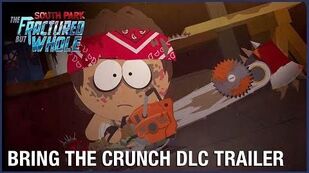