The South Park Game Wiki
Register
Don't have an account?
Sign In
Advertisement
in: Characters, Humans, KKK Members,
and 22 more

Butters Stotch (born September 11, 1987) is a paladin at Kupa Keep and is one of the six playable partners in South Park: The Stick of Truth and the first one you unlock in the game.

For Butters' role in South Park: The Fractured But Whole, see Professor Chaos.

Butters wears a turquoise shirt with a yellow shield on it and pants.  He has blue shoulder pads with white outlines, a dark blue cape, and gold gloves with yellow trim. He also has a belt that appears to just be a rope and a gold crown/headband with a red (occasionally purple) gem in the center and has yellow puffball spiked hair.

Butters is the first character you meet.  He helps you recruit the three warriors in Call the Banners, and goes with you into the basement of the Inn of the Giggling Donkey. He is a boss in the school if you side with the elves. He helps attack Clyde's Fortress and fights the final boss.

Butters is the first available ally in the game, joining once Call the Banners is started. He is able to heal the New Kid thanks to his Buddy Ability, and smite his enemies with the power of his hammer.

His standard hammer attack is unique in that it counts as two hits - one for the standard physical attack, and another for the bonus Holy damage. This makes Butters good against reviving enemies like Nazi Zombies; the first hit deals a lot of damage and sends the enemies' HP to zero, and the second knocks them out of the field.

There are many problems with Butters, though. He has a perk causing him to take twice as many attacks compared to the New Kid. While the latter can accumulate resistances to enemy attacks or drain health, Butters cannot. He also doesn't have a notably high HP pool, having only the same maximum HP as the New Kid, and he cannot use his buddy ability to heal himself. Altogether, this makes Butters surprisingly squishy for an early-game buddy.

He also doesn't have a ranged or multi-hit attack. This is notable in the first buddy tutorial where frontline enemies can spawn Riposting or with Shields to further underline the game mechanics. Without the missing attacks, he cannot attack Riposting enemies safely or pressure Shields effectively without the New Kid's help.

Overall, Butters serves as a decent starting buddy and has a very useful two-hit attack and decent hard-hitting abilities, but the hits he takes add up and he needs all the healing potions to survive getting battered time and time again.

When Butters becomes Professor Chaos, he chooses one of five options from the wheel of fate.

Butters next to Jesus during his summon attack.

Butters introducing himself to the new kid. 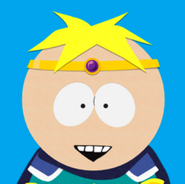 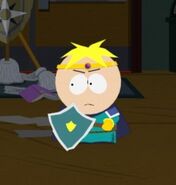 Butters with the "Shield of Righteousness" during his boss battle. Butters healing Craig during "The Bard".

"Shall I heal the king, my lord? Or maybe let him suffer just a little bit more?"

Butters with the other humans at Kyle's meeting.

"Why, if it isn't Kyle's lapdog - the traitor Douchebag."

Butters as Professor Chaos, facing off against Nazi Zombie Death.

Professor Chaos without a wheel.