The South Park Game Wiki
Register
Don't have an account?
Sign In
Advertisement
in: South Park: The Fractured But Whole, Characters, Female characters,
and 7 more

Answering the call of justice, Call Girl disconnects criminals and places their evil ambitions on hold. Extending her influence from social media to the town of South Park, Wendy Testaburger uses technology and an army of followers to unfriend evil.[1]

Call Girl is the alter-ego of Wendy Testaburger in South Park: The Fractured But Whole.

Call Girl wears a pink mask over her eyes and a headset on her left ear. She also wears a purple tank-top with a white strap that holds her cell phones and other gadgets, pink gloves, a pink skirt and pink shoes. Befitting her theme, she often uses social media slang and internet terminology in battle.

Before officially committing as a member of the Freedom Pals, Call Girl works alone, keeping herself above the civil war in favor of investigating the larger crisis gripping South Park. She forms a strong bond with the New Kid, believing that they are the only one who understands the larger situation besides her; as such, she often looks out for their well-being and helps them when she can. If the New Kid is female, she even gives her a friendship bracelet beside the park bathroom before setting out on the "(You Can) Call on Me" quest.

She seems to have unprecedented abilities, as she can actually hack into security systems, aiding in breaching U-Stor-It when all the gates shut and locked, making her having abilities that aren't imaginary.

Call Girl's relationship with the other heroes is somewhat unstable; depending on the situation, she can be trying to keep them on track, mildly flirting with them, or mocking some of their quirks (such as claiming that Kyle had a much cooler costume in The Stick of Truth or taking a selfie with a hysterical Mosquito in the background with the caption "Boys are kinda cute when they cry. #sorrynotsorry").

Call Girl first appears during the Raisins Girls' ambush of The New Kid, using her hacking abilities to troll the Raisins Girls and scare them into retreat. She comments that The New Kid has made powerful enemies thanks to their bust of the Italian mafia the previous night, warning them that someone is uniting the crime families in a bid to become Mayor of South Park. She assures the New Kid that they can rely on her assistance when necessary before leaving to continue searching for clues on social media.

Call Girl returns during Night 2, appearing on the roof before Coon and Friends during their infiltration of U-Stor-It. She reminds them that someone is uniting every criminal element in South Park for a nefarious purpose before reassuring them that she'll be there to help them when they get into trouble; The Coon, however, was unimpressed, commenting that "apparently ANYONE can become a superhero now." Nevertheless, Call Girl stuck to her word, provided clues to uncover the secrets. Call Girl also showed up and joined Coon and Friends in battle when they uncovered the Methheads' operation to harvest cat urine to taint the drugs and alcohol of South Park. She was an available combat buddy ever since.

The day after the defeat of Professor Chaos, Call Girl asked for the New Kid's help in renewing her phone's data plan after it was mysteriously cancelled. When they went to D-Mobile, they found that the staff had been replaced by Crab People, forcing them to defeat the Crabs and their Manager, King Crab; afterwards, Call Girl firmly allied herself with the New Kid for future missions. This came in handy when Doctor Timothy turned Coon and Friends against the New Kid following the defeat of Shub-Niggurath; Call Girl and Professor Chaos were the only ones completely unaffected by the mind control, allowing them to assist their friend in the resulting brawl. Call Girl didn't appear during the entire process of the alliance between two sides, she also had no role at all in the franchise plan which Doctor Timothy had created.

After The Coon betrayed the newly-united heroes under the guise of Mitch Conner, Call Girl began tracing the calls he made to the New Kid, eventually triangulating the villain's location at the South Park Community Center, where everyone found the Coon.

Call Girl worked with the Freedom Pals during the genetics lab mission. She was frightened when the incidents happened. She also pushed Doctor Mephesto to install an app that operates the tour tram; this attempt failed as the lab is a D-Mobile dead zone. When Mitch Conner revealed his seven-step plan to the Freedom Pals, Call Girl stealthily took a photo with her phone.

Ten days later, when the Freedom Pals reached the mayor's office, only to discover that Mitch Conner had been sworn into office, Call Girl was in shock and was the first to concede defeat.

Call Girl fought with the New Kid when they traveled back to the first day, trying to convince the past kids that what the future-selves were doing was more than a game, however, nobody listened and Clyde even showed his disgust regarding Call Girl's words, saying "This is why we didn't have girls to play in the first place." She joined the New Kid, Human Kite, and Mysterion in battle against High Jew Elf Kyle (while commenting on how much cooler Kyle looked back then, to Human Kite's annoyance).

During Mitch Conner's final attempt to inaugurate himself as mayor, Call Girl asked the New Kid to upload the photos containing the plans of Mitch Conner.

Saves the New Kid from the Raisins Girls' ambush by trolling them on social media.

Helps Coon and Friends and Toolshed to defeat the metheads, becomes an available combat buddy from that point forward.

(You Can) Call on Me

Asks the New Kid for help to restore her Data plan. Saves D-Mobile from the Crab People.

Infiltrates in the South Park Police Department alongside the Freedom Pals. (despite not showing up in the cutscenes) Helps The New Kid and Professor Chaos in the battle against Dr. Timothy.

Searches for The Coon and Mitch Conner's exact ubications.

Goes to Dr. Mephesto's laboratory alongside the Freedom Pals in order to stop Mitch Conner's plans.

Goes back in time alongside the Freedom Pals in order to stop the rise of Mitch Conner. Is a mandatory party member in the fight against High Jew Elf Kyle.

A gadgeteer and white-hat hacker with a heart of gold. Call Girl viciously trolls crime on social media and IRL. Equally adept at doxing, trolling and debuffing. - In-game character description

Call Girl is a versatile character who is effective at most ranges. Her Selfie-Stick Strike is a powerful melee attack that can make it tougher for the victim to move around; alternately, she can use her Blocked ability to draw a foe's attention to her. At long range, she can damage and weaken foes with Phone Destroyer, one of the few attacks in the game that can hit at any range. Finally, her ultimate attack is lethally effective against groups of enemies; if there's only one or a few, however, Phone Destroyer is usually a better option, as Flash Mob doesn't take very much health.

Most of Call Girl's abilities can inflict Defense Down on their targets, increasing the damage she and her allies inflict on them. She also has high health, making her a good choice for most fights. Her main weakness is crowd control; aside from her Ultimate, all of her abilities target a single enemy.

For the complete collection of Call Girl's quotes, refer to the page Call Girl/Quotes.

Call Girl offering her assistance to take down the Meth Heads inside U-Stor-It.

Call Girl confronting the Meth Heads after defeating them.

Call Girl, as her alter-ego Wendy Testaburger meeting up with The New Kid after school on Day 3 in-game.

Call Girl meeting with The New Kid in the Cissies bathroom (if The New Kid is sexually cisgender or gender-fluid).

Call Girl meeting with The New Kid in the Boys bathroom (if The New Kid is male and sexually other than cisgender).

Call Girl meeting with The New Kid in the Girls bathroom (if The New Kid is female and sexually other than cisgender).

Call Girl is extremely sad at her phone being dead.

Call Girl and The New Kid being thanked by the employees of D-Mobile after defeating King Crab.

Call Girl camping above D-Mobile after the rescue of its employees. 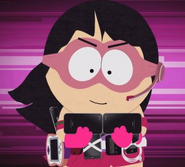