The South Park Game Wiki
Register
Don't have an account?
Sign In
Advertisement
in: Stub articles, Characters, Characters in South Park: The Fractured But Whole,
and 8 more

Chaos Kids are enemy characters in South Park: The Fractured But Whole.

The Chaos Kids are initially the subordinates of Professor Chaos, They lurked around town ever since the first day to dispense lava in the streets. One Chaos Kid has also spread lava in front of the South Park Bank and will taunt passing heroes, however, he was in panic when the New Kid and Toolshed cleared it up.

Unlike other enemies like the Sixth Graders or the Raisins Girls, Chaos Kids will attack the New Kid from the beginning of the game despite the fact that they have never done anything bad to them at all.

Their major prominence is in U-Stor-It, Professor Chaos' Hideout, after Coon and Friends and Toolshed are discovered by him, he will sent the Chaos Kids to attack them and stop their progress, during this part, they will be accompanied by dogs and Mexican minions hired by Professor Chaos.

After General Disarray and Professor Chaos' defeat, Chaos Kids will start to work on their own and continue to spread lava around South Park as well as attacking the New Kid and their party, even if Professor Chaos is on their team, they state that the checks Butters gave them for their services as minions were not accepted and that "They wanna get paid", thus no longer taking orders from him.

After Mitch Conner, kidnaps the New Kid's Parents and he/she is assaulted by The City Ninja Alliance, Chaos Kids will appear on the Park along with some Bums, who are angry at the fact that the New Kid destroyed their Meth Lab in U-Stor-It. Chaos Kids' base used to be U-Stor-It, but was shut down after Professor Chaos' defeat, implying an alliance between these two as they lost their lab and base, however, this won't last long.

Having beaten the game, they will stay on the left of the cinema, and can be battled anytime.

It's their major prominence. They are sent by Professor Chaos to stop Coon and Friends and Toolshed from getting to him. After Professor Chaos' defeat, U-Stor-It is shut down and Chaos Kid will begin to work on their own.

They team up with other foes during certain challenges in Danger Deck.

During the final battle, if The New Kid's kryptonite are The Chaos Kids, The Zarganor will will use Doctor Timothy's brain to read their character sheet and then he will use Skim Milk to make copies of a Chaos Kid who will attack The New Kid and their allies. The Alien can bring as many copies of the Chaos Kid as he wishes to until he is defeated.

The Chaos Kids lurking around South Park usually attack in groups of four of five, with two Swarmers at the front, one or two Exploders or Snipers in the middle, and one Assassin and one Bomber at the back. The player should beware of the Bombers and the Assassins; the former have a long attack range, while the latter have high movement range (4). A good tactic against them is to have allies with a high amount of health (Call Girl, Super Craig, Tupperware or Captain Diabetes) and/or that can easily inflict status effects and attack from distance (Wonder Tweek, Fastpass, Professor Chaos or Toolshed).

Like all Chaos Minions, Chaos Kids are completely immune to the Burning status effect because of their tinfoil outfits (tinfoil is immune to fire). Conversely, they're proficient at Burning the heroes.

These Chaos Kids usually stand in the middle of the battlefield, behind the Swarmers. They specialize in attacking the New Kid and their party from a distance; however, they have low health and can be easily defeated once brought into range.

These Chaos Kids are a bigger problem for The New Kid and their friends, because, just like other Griefers or Bombers, they have a long range attack, which inflicts Burning. Their other attack also causes a high amount of damage to an ally.

For the complete collection of Chaos Kids' quotes, refer to the page Chaos Kids/Quotes. 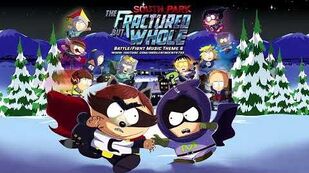