The South Park Game Wiki
Register
Don't have an account?
Sign In
Advertisement
in: Characters, Adults, Friendable Characters,
and 9 more

Chris's skin tone changes to match the New Kid's, but his clothing remains the same. He has a white shirt and black pants.

In South Park: The Fractured But Whole, Kelly reveals the New Kid's dad is name Chris.

Demands the player go out and find kids to play with.

Talks to the New Kid when he gets home. Finds and grounds him if he doesn't return in time.

Talks to the New Kid when he gets home. Finds and grounds him if he doesn't return in time.

The New Kid chases the Underpants Gnomes into his parents' bedroom.

Argues with Kelly over the fact that their child has too many friends.

Argues with Kelly over the fact that The New Kid talked to Mr. Mackey about their gender.

Argues with Kelly over the fact that she confirmed their child's sexuality and race to Mr. Mackey and PC Principal.

Insults Kelly for seemingly no reason and later on hits her after she slaps him.

Is kidnapped by Mitch Conner alongside Kelly.

Is held hostage alongside his wife in Dr. Mephesto's laboratory. Either him or Kelly have to be killed in order to advance.

Tells the New Kid about their backstory. On the present day, he has feelings for Kelly again and they both decide to make love to each other.

Chris insists that the New Kid goes out and makes friends and constantly comments on his appearance in a negative way. Upon reaching 50 friends, he friends the New Kid on Facebook.

Outside of this, he has little role in the story outside of grounding the New Kid if he's found in the Lost Woods or if the New Kid doesn't go straight to bed at the end of a day and in the backstory of the New Kid.

Chirs has a much bigger role during this game. During the main story, he is usually seen in his living room smoking cannabbis.

On the first day, Chris is seen arguing with his wife Kelly over their child, as he claims that they only moved to South Park to hide and that their child getting too many friends or talking with them would be a serious problem for them. After being heard and seen by his child, Chris goes to his room to consume brownies with marijuana in them.

As part of "The Amazing Butthole's" backstory, The Coon uses an event that happened to The New Kid when they were six years old, they walked up to their parents having sex.

Later on, during the first day, The New Kid tells Mr. Mackey, the school's counselor, about their gender. He then calls the New Kid's mother to confirm it, to which she replies by saying that they already knew about the subject. This enrages Chris, who starts an argument with Kelly regarding what she said and asks her if she told him the truth, to which she anwsers the following:

Afterwards, he tells Kelly to not say anything and insults her when she attempts to get a glass of wine. At the same moment, their child comes in and him and Kelly tell them to eat their dinner and go to sleep.

When trying to sneak out of their house, Butthole finds his father passed out in the sofa having a nightmare.

During the second day, The New Kid is more specific about their gender to Mr. Mackey and also tells him about their sexuality. Later on, he tells PC Principal about their race and Ethnicity. Kelly confirms both of these facts to each one, which outrages Chris, but she excuses herself by saying the following:

Just as The New Kid comes in, Chris defends himself by saying that confusion was the point, and that if their child came too close to the truth it would be very dangerous. both of them tell them to eat their dinner and go to sleep while they go to their bedroom to argue. Before the New Kid goes to sleep, Chris will come to their room and say that while they don't usually talk about it, he tells them that him and Kelly are proud of their race and whishes them good night afterwards.

Just as in the previous night, Chris is seen passed, this time in the kitchen, having a nightmare again.

During the third day, Chris and Kelly argue over the ways each one tries to run away from their problems, he then goes to his bedroom to eat brownies and insult his wife.

Afterwards, Kelly slaps Chris for insulting her once again for putting a medicine in their child's dinner, at to which Chris replies by hitting her.

Later on the night, there can be two possible outcomes for what him and Kelly are doing.

During the fourth day, Chris and Kelly are violently assaulted in their house and then reveal to be held hostages by Mitch Conner, who uses them in order to blackmail The New Kid do they can do chores for him. Mitch then lies to Butthole, as he isn't going to set their parents free.

Is later revealed that Mitch Conner took Chris and Kelly to Dr. Mephesto's laboratory, there, Chris is placed naked on a surgical table while being trapped by a tube brace while Kelly was attacked by Mutant Sixth Graders who broke her legs and almost ripped her left arm apart, incapacitating her as a result.

After surviving the many horrors of the laboratory (as Mitch Conner had deactivated the security measures), The New Kid comes across their parents. Chris informs the New Kid that they are trying to extract an organic DNA sample from one of them. Kelly informs her child that the scientists were just about to cut Chris' head off and that the only way to proceed is to fifinsh the job, Chris hears this and insults her. After hearing what his wife says, Chris insults Kelly for not being able to keep quiet about their child powers and tells them to use their mother's arm as an organic DNA sample. The New Kid then has to kill one of them while they both beg them to spare their lifes.

After The Freedom Pals go back in time to stop the rise of Mitch Conner, The New Kid encounters their past self in the toilet, just like in the first day. The actions of Chris are just like they were on the first day.

The New Kid, The Coon and Mitch Conner go back in time so the New Kid can stop themselves from ever seeing their parents engaging in sexual activities, they accomplish their goals and Chris and Kelly tell their child about their backstory:

Chris made a Facebook account and he already obtained a lot of followers upon joining, whereas Kelly uploaded her first Instagram picture and got five thousand followers. Their powers didn't go unoticed, and goverment agents kidnapped both of them and made experiments with them in order to find out their power source. They both met in the goverment's laboratory and fell in love with each other, giving birth to the New Kid, who obtained a million followers upon being born. After that, the three of them escaped to prevent the New Kid from being used as a rat lab and moved from town to town in hopes of living a normal life, to accomplish this, Chris and Kelly started to put special medicine on The New Kid's dinner in hopes that it would control their powers, but the only thing it did was giving him powerful and smelly farts. After telling the truth to their child, Chris and Kelly start to feel better and they decide to lay off the marijuana and wine respectivley.

Back to present day, Chris and Kelly love each other again and are glad that the three of them decided to choose South Park as a place to live, in fact, they are both so in love with each other that they decide to leave their child alone and go to their bedroom to have sex, much to the New Kid's shock, to which Professor Chaos tells him that "no matter how much [they] try to change things, [their] father will have always fucked [their] mother. 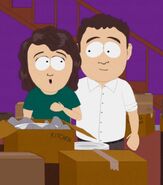 Dad kicking the New Kid out of the house.

"Think about what you've done!" 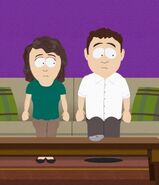 Dad and Mom at home.