The South Park Game Wiki
Register
Don't have an account?
Sign In
in: Characters, KKK Members, Humans,
and 20 more

Clyde Donovan is the teritiary antagonist in South Park: The Stick of Truth. He is a merchant at Kupa Keep, and sells weapons and armor, until he is banished for not protecting the stick.

For Clyde's role in South Park: The Fractured But Whole, see Mosquito.

Clyde wears a red shirt and black pants with a blue cape. He has a belt with scissors and a metal helmet.  He has messy brown hair and is always seen wielding a wooden sword.

Later, after he is banished, he changes his outfit to dark gray armor, purple/black hockey gloves, and a red cape. He also wears what appears to be a crown, which is made of a purple headband and gray spikes made of cardboard which are taped together. He also has a small skull on the front of the crown, also taped on. There are sticks sticking out from underneath his shoulder pads. 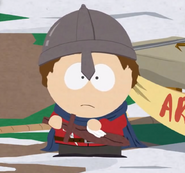 Clyde at the armory.

Clyde with his container of green goo.

Clyde falling off his tower of darkness.

Clyde can be seen lying near his fortress after farting on Princess Kenny's balls.

Community content is available under CC-BY-SA unless otherwise noted.