"Corey Haim" is an exclusive boss (and the final boss encountered) in the South Park: The Fractured But Whole DLC "From Dusk till Casa Bonita".

Despite being summoned as "Corey Haim", he looks nothing like Corey Haim, but is actually Michael Jackson. No one can tell the difference except the summoner Master Vampire Adams.

He is seen wearing a white t-shirt, with a gold glitter jacket with silver and white accents and red pants.

Upon appearing from the portal conjured by Master Vampire Adams, he proceeds to grab Karen and dive down the cliff waterfall inside Casa Bonita, forcing The New Kid to give chase by diving down the cliff as well.

He is then seen later at the ground-level dining floor after The New Kid emerges from the wishing well inside Casa Bonita, engaging The New Kid, Henrietta, The Coon and Mysterion into combat. After being defeated, he is then sucked back into the portal previously conjured by Master Vampire Adams, never to be seen again.

In this state, Corey Haim moves around within two squares of the battle grid, is free to attack and has three different moves.

After his health is less than 50%, Corey Haim will possess Karen, and use her as a method to deliver a more powerful version of Thrilling Touch. However, he will no longer launch any offensive attacks.

For the complete collection of Corey Haim's quotes, refer to the page Corey Haim/Quotes.

Corey Haim jumps off the cliff while holding Karen.

"No one wants to be defeated! Shamone!" 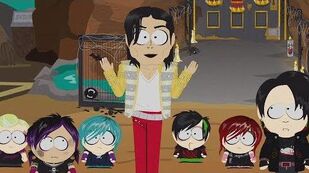 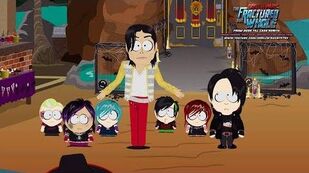