Crab People look like giant anthropomorphic crabs, with four legs, pincers for hands, and extra pairs of legs on their backs and stomachs. They have beady black eyes on stalks, two pairs of antennae (one behind their eyes and one on their face, resembling a mustache), and jagged mouths. They come in a wide variety of colors, tending towards shades of red and brown.

Crab People serve no real role in the storyline, and only one appears in the game. After learning the Nagasaki fart, the New Kid can break the rock blocking the path to a Crab Person in the cave portion of the sewers, and talk to him to friend him on Facebook.

Crab People return with greater prominence in this game, acting as an enemy faction. They first appear during (You Can) Call On Me, having replaced the staff of D-Mobile to cancel Call Girl's Wi-Fi plan. When Call Girl and The New Kid investigate D-Mobile, the Crab People attempt to fool them (poorly), only to blow their cover when Call Girl rejects their offer of a 5 GB data plan. They attack the heroes alongside their Manager, King Crab, only to be defeated and battered into retreat. Before his explosive demise, King Crab mentions that his people were acting on behalf of "Mr. Conner", presumably to hinder the heroes' investigation into his plans by disabling Call Girl's access to social media.

Following these events, Crab People appear in the overworld as enemy encounters, mainly around the lake. By Chapter 4, they have united with other enemies of the newly-merged Freedom Pals in a bid to stop their hunt for Mitch Conner, beginning with a Crab Person joining Mercedes, Mr. Kim, the leader of the Sixth Graders, and a Redneck in their joint assault on The New Kid outside of Tweek Bros. Coffee. 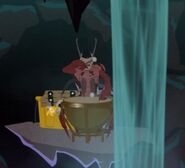 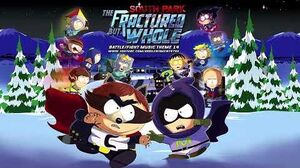