The South Park Game Wiki
Register
Don't have an account?
Sign In
Advertisement
in: Humans, KKK Members, Characters,
and 20 more

Kupa Keep (switches to Clyde's side after Attack the School)

Craig Tucker is a character in South Park: The Stick of Truth and the quaternary antagonist. He was formerly one of the warriors of the Kingdom of Kupa Keep and is later part of Clyde's Fortress.

For Craig's role in South Park: The Fractured But Whole, see Super Craig.

Craig wears a tan shirt and black pants. He has a brown cape and has a belt across his body with pouches. He wears a blue chullo hat with a yellow puffball on top and has a brown chinstrap made of fabric.

The Stick of Truth

After you get past the gate in Clyde's lair, Craig will be in the room up on the other floor. He will have two Nazi Zombie cows raised up on your floor and begin to raise the third, you can get rid of the other two by shooting the lantern and farting on the flames near Stan's door who then cuts the rope, and then using Nagasaki to let Ike in and farting on the now on fire rope. Sometimes during the fight, he creates multiple clones of himself which he does at least twice. 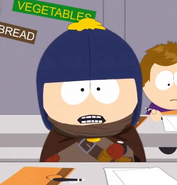 Craig while in detention. ("Heeeeere they come!")

Craig during "The Bard".

Craig replacing Clyde at the armory after being busted out of detention. 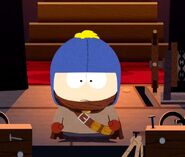 Craig during "Beat up Clyde" before attacking the player. 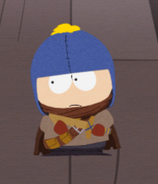 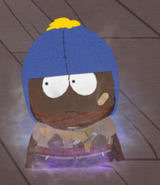 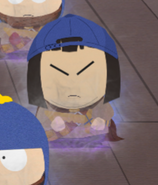