Danger Deck is a downloadable content expansion for for South Park: The Fractured But Whole. It is released on December 19, 2017 for Microsoft Windows, Xbox One, and PlayStation 4[1]. The Nintendo Switch version was released on April 24, 2018.

Danger Deck is a section in the Freedom Pals‘ base that utilizes holographic images to train the combat skills of allies. Tupperware invented this section to push the boundaries of the Freedom Pals, nevertheless, if The New Kid has paid for it, access is enabled to the facility as well.

There are five Scenario Sets, consisting of three challenges each. All challenges in the Danger Deck are locked at Mastermind combat difficulty, however the enemies' health bar is adjusted in accordance to the player's current Might level. The challenges can be performed in any particular order.

After a simulation challenge is completed with a victory, the New Kid will receive rewards. For single challenges, the rewards consists of antidotes, health refreshments, revive serums, and some cash. The quality of the consumables depends on the difficulty of the battle. When all challenges in a single Scenario Set is cleared, the main reward for the set is dispensed, and the Ultra Modifier for the Scenario Set is immediately unlocked.

In Ultra Modifier mode, the player would be imposed in conditions disadvantageous to the player, however the rewards offered upon completion are outstanding.

Apart from the challenges itself, the DLC also includes some free in-game costumes upon purchase.

It is also worth noting that most rewards earned from the Danger Deck will be included to all save files of the game, therefore if the game were to be replayed again from the beginning, the rewards can be obtained right away from the very first mission of the game itself. However, the Summons Decryptor and City Ninja Assassination Contract is not available for the inclusion.

The iPad station which initiates the Danger Deck challenge, located in the Training Room of the Freedom Pals Base.

Tupperware appearing to transport The New Kid to the Danger Deck room when accessed via DLC Bus Stop. 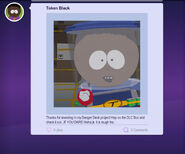 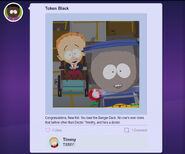 Coonstagram post of Tupperware and Doctor Timothy congratulating upon completion of all Danger Deck challenges in Normal and Ultra modes.