DogPoo wears the typical elf outfit and an orange cape along with looking dirty like he just rolled in mud and dirt. He has messy brown hair. He also carries a sword.

In The Fractured But Whole, DogPoo is seen in his original outfit, wearing a heavily stained brown jacket and dark green pants.

DogPoo provides a quest to the New Kid that involves the New Kid tearing down KKK banners across the town and then returning to him afterwards. DogPoo friends him on Facebook upon completing this quest.

In South Park: The Fractured But Whole, Dogpoo is seen hanging around near the restrooms of the playground. A selfie can be taken straight away with him without any pre-requisites.

He plays no role in the game's storyline.

DogPoo at the Elven Kingdom. 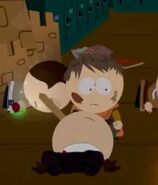 DogPoo during "Attack the School".

DogPoo with Kyle and Jason during "Attack the School".
Community content is available under CC-BY-SA unless otherwise noted.
Advertisement