The South Park Game Wiki
Register
Don't have an account?
Sign In
Advertisement
in: Characters, Minor Characters, Gingers,
and 8 more

Dougie wears a brown sweater with an image of a bug, blue pants and a pair of black-rimmed glasses. He also has red hair and freckles.

As General Disarray, he wears tin foil glasses and a tin foil armor with his initials "GD".

Dougie has no major role in the story. After The New Kid visits Kupa Keep, he will meet him outside of Butters' House. When the New Kid talks to Dougie, he tells him that the Grand Wizard won't let him play the game because he's too ginger, but Butters lets him be his squire on the slide. He will then friend him on Facebook.

When The New Kid enters Professor Chaos lair at U-Stor-It, he will find Dougie as General Disarray and will friend him after he talks to him.

In this game Dougie goes by his villian alter-ego, General Disarray and plays a more significant role. He acts as the second-in-command to Professor Chaos, conducting his plan to encase the whole town in "lava". He is then seen inside a warehouse of U-Stor-It, controlling the "lava" inventory. However, he is then defeated by The New Kid, placing a dent in Professor Chaos' plan.

Is the second-in command of the Chaos Kids. Appears as a mini-boss and tries to stop Coon and Friends and Toolshed from reaching Professor Chaos.

Makes a Coonstagram post in which he states that he is retiring from from being a villian.

A holographic version of General Disarray appears as the main enemy of the Disarray Unfolded Challenge of the Danger Deck. 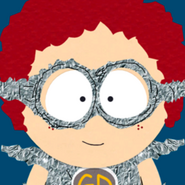 General Disarray being detained by Mosquito and Captain Diabetes after being defeated.
Community content is available under CC-BY-SA unless otherwise noted.
Advertisement