Eric Cartman is the Grand Wizard King and leader of the humans at Kupa Keep. He is one of the six playable party members in South Park: The Stick of Truth, and is the last one to be unlocked.

For Catman's role in South Park: The Fractured But Whole, see The Coon.

Cartman is visibly overweight, being larger than all the other kids.  He wears a red-violet wizard cloak with a blue cape held on by gold buttons.  He has yellow gloves, a turquoise belt with pouch, and a turquoise wizard hat with a yellow stripe at the bottom and a yellow star with a smiley face. He has messy reddish brown hair.

Cartman becomes an available ally after Defeat the Underpants Gnomes is completed. True to a wizard, Cartman is a glass cannon. He has low HP at all levels, if not the lowest HP compared to everyone else, but makes up for it by having the Highest PP of all the buddies and can easily dish out a lot of damage to compensate. Unusually, he has 2 perks instead of one, and they're unlisted. His regular attack has him hit a single opponent with his staff several times, it's weak but good against shields and if you successfully perform it he'll gain 5 PP.

Cartman with the Humans in the Giggling Donkey.

Cartman after being defeated during "The Bard". 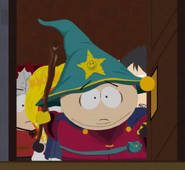 Cartman with Butters, welcoming Douchebag to the KKK.

"...and, with the bravery of a noble knight, beat up Clyde."

Cartman angry at the new kid for betraying him. 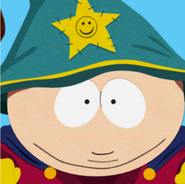 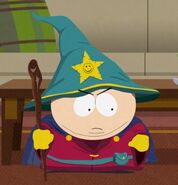 Cartman at the New Kid's house.

Cartman with the others, looking up at Clyde's fortress.

Русский
Community content is available under CC-BY-SA unless otherwise noted.