Esther has short shoulder length black hair and wears a sky blue jacket with a pink trimming and pink trousers.

In South Park: The Stick of Truth, while Esther isn't part of any quests, you can still talk to and befriend her at the News Office.

In South Park: The Fractured But Whole, she and Jenny are seen building a snowman, or snowwoman as she calls it near Bebe's House. A selfie can be taken with her without any pre-requisites.

She plays no role in the game's storyline. 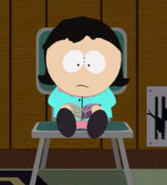