Non-Roleplay
"You have slain the mighty frost giant. I stand in awe of you, hero."

In South Park: The Fractured But Whole, Francis will be in his regular outfit; his helmet, shoulder pads, coat and mittens will be removed.

In South Park: The Stick of Truth, Francis has no real role in the story outside of as a Facebook friend.

Francis can be found just before the path to Kenny's House, creating a snowman. He will claim that his snowman is an undefeatable frost giant; he will befriend you in Facebook when it is destroyed by attacking it with The New Kid's melee weapon.

In South Park: The Fractured But Whole, Francis will be seen inside Raisins restaurant, he will be sitting near the bar next to the restaurant vendor (Mercedes). A selfie can be taken with him after equipping The New Kid with an Assassin ability.

Similar to the first game, he plays no role in the game's storyline. 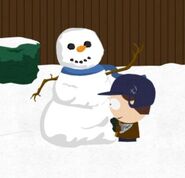 Francis with his "frost giant".

Francis after his snowman is demolished by the player.

Francis mingling at the bar inside Raisins.
Community content is available under CC-BY-SA unless otherwise noted.
Advertisement