From Dusk till Casa Bonita can be purchased as a stand-alone DLC,[2] or obtained for free if the Season Pass for the game is purchased. For the Nintendo Switch, this DLC comes packaged together with the main game.

From Dusk till Casa Bonita focuses on Mysterion (Kenny), whereby he must rescue his sister Karen from the influence of Vampire Kids. The events will primarily take place at the eatery Casa Bonita. In this mission, The New Kid will be teaming up with Mysterion, The Coon (Cartman) and Henrietta Biggle, the Goth lady who will play as a supporting Witch role; all will be taking down the legion of Vampire Kids together (while enjoying them sopaipillas throughout the way). A new superhero class Netherborn (Mysterion's class) is introduced in this expansion pack. It also includes new Goth-themed items.

For the walkthrough of this DLC, refer to the page From Dusk till Casa Bonita (Mission).

The player will receive no free items at the beginning of this mission; they will have to be discovered and acquired throughout the course of the whole mission. The following list shows the items obtainable in this particular expansion pack of South Park: The Fractured But Whole: 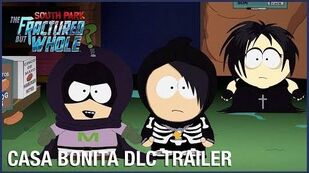