The South Park Game Wiki
Register
Don't have an account?
Sign In
Advertisement
in: Characters, Adults, Friendable Characters,
and 12 more

Gerald wears a magenta yarmulke, a khaki jacket with a blue shirt underneath and forest green pants. He also has brown hair with sideburns and a trimmed full beard.

Gerald has no role in the story. He is always seen shoveling snow outside Kyle's house. He can be talked to gain him as a friend on Facebook. He is a non fight-able Nazi zombie that is only seen for a split second before he's turned back to normal 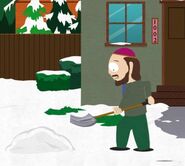