The South Park Game Wiki
Register
Don't have an account?
Sign In
Advertisement
in: Characters, Gnomes, Bosses,
and 11 more

Gnome Warlock is a boss in South Park: The Stick of Truth. He is responsible for shrinking the player, which caused the player to chase after him. Eventually, they fight with the player being the victor. After losing to the player in battle, he explains he was only using underwear to stop the Nazi Zombie Goo, but before he can explain what it does, he is crushed the player's mother's breasts, possibly killing him.

Melee Attack - The warlock attacks the new kid with his pencil-staff.

Shrink Underwear - The warlock sneaks behind the New Kid and shrinks his underwear, inflicting ability down if not blocked.

Levitate - This attack is rare. He gives the New Kid a wedgie in a magical way and inflicts attack down if not blocked.

Hanging Low - This attack is not summoned by the Warlock, but from The New Kid's dad instead. This will summon the dad's balls to hit The New Kid and causes heavy damage if not dodged.

The Gnome Warlock first appeared after The New Kid has defeated the other Underpants Gnomes on the first round and eventually shrunk him. Later on, he is shown with some remaining gnomes in the parents' room stealing underpants. As soon as The New Kid defeats the gnomes for the last time, he chases after the Warlock to the parents' bed and battles. After the Warlock is defeated, he just simply gave The New Kid some Gnome Dust to regrow again and tries to explain that the gnomes are just trying to stop the Nazi Green Goo to spread around in the Gnome Underground World. But before he could finish, he gets crushed and possibly might have died. 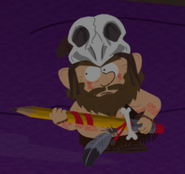 The Underpants Gnome Warlock in battle. 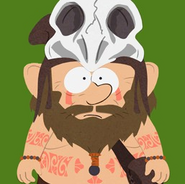