The South Park Game Wiki
Register
Don't have an account?
Sign In
Advertisement
in: Characters, Drow Elves, Humans,
and 21 more

The Goth Kids are characters in South Park: The Stick of Truth and South Park: The Fractured But Whole. They are a group of four goth friends who sit around all day and angst about how much life sucks.

Michael is the tallest and oldest goth. He appears to be the leader of the Goth Kids. Michael has puffy black hair and wears a black jacket over a white shirt and uses a cane. He is in the fifth grade.

Pete has black and red hair with a fringe over his right eye and wears black with purple shoes. Although Pete's grade level remains unknown, it is generally assumed that he is in the fourth grade.

Henrietta is the only female and overweight member of the Goth Kids. She is a playable buddy in the South Park: The Fractured But Whole From Dusk till Casa Bonita DLC. Her brother is Mintberry Crunch. She wears a black dress with fishnet, has black hair and is in the fourth grade.

Firkle is the youngest and smallest goth. Firkle has the body type of a kindergartner, a black fringe that partially goes over his left eye, purple lipstick and all black clothes. His grade is indisputably a kindergartner, due to his body height and shape matching the other kindergartners.

The Goth Kids at the school.

"I feel like such a homo sapien right now".

The Goth Kids after clearing the way for the New Kid.

The Goth Kids realizing the school's desks don't have insides. 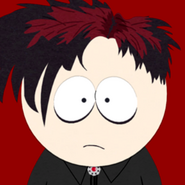 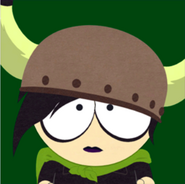 The original version of the Goth Kids' Facebook profile icon.

The New Kid is sent to recruit the Goth Kids by Cartman , who make him dress as a goth and go and hold a sign saying "Fuck the Conformists" at a PTA meeting.

During this quest, the Elf King tries to force the New Kid to join him and bring the Goth Kids to his faction. Whether the New Kid does this or not is up to the player, but after holding the sign at the PTA meeting, they agree to help the New Kid and all four friend him on Facebook.

The New Kid can then choose to recruit them to either Kupa Keep or the Drow Elves. They will then participate in the attack on South Park Elementary, clearing the way for the player to enter the school through a side entrance.

After the New Kid defeats either Kyle or Cartman, they realize that the school's desks don't have insides, so the stick couldn't have been hidden inside a desk. Henrietta then finds the message on Clyde's desk to check his locker. The Goths then appear in the background when Cartman, Kyle, Stan and Douchebag find Clyde's laptop in his locker.

They can be later seen participating in the attack on Clyde's fortress, although they are hard to notice.