The South Park Game Wiki
Register
Don't have an account?
Sign In
Advertisement
in: Girls, Characters, Friendable Characters,
and 6 more

Heidi Turner is a minor character in South Park: The Stick of Truth.

Heidi is a member of the Pleases and Sparkles Club. She is found to be the person spreading rumors about Allie Nelson when the girls look over the translated abortion records. However, they immediately forgive her since she's really sorry. If the player ever talks to her again after befriending her, she'll state that they should stay as a girl, the reason being that it's so much better.

Heidi with the other girls looking over the translated records. 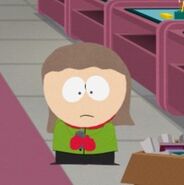 "I learned that betrayal can actually make your friendships stronger, and it's all thanks to you!"