She plays a large role in the downloadable content From Dusk till Casa Bonita.

Henrietta is the only main female member of the Goth Kids.

Henrietta is overweight and has straight medium length dark hair. She wears a black dress, a necklace with a cross attached to it, and black fingerless gloves. She is also seen with a black cigarette pipe, constantly smoking cigarettes off it.

In South Park: The Stick of Truth, during the mission Attack the School, a bronze helmet with tiny wings on its sides, a bronze breastplate and a red cape is added to her regular outfit.

In South Park: The Stick of Truth, she is seen hanging out alongside the Goth Kids boys Pete, Firkle and Michael by the alley on the right side of South Park Elementary. The mission Nonconformist will be provided for The New Kid to be undertaken; upon completion she will be added as a friend in Facebook, also she will participate in the mission to lay siege on the school, where The New Kid will be provided access inside by the school's side door. After the mission, she will be seen again at the same spot alongside the Goth Kids boys.

In South Park: The Fractured But Whole, Henrietta is always seen inside her own bedroom of her house, also hanging out alongside the Goth Kids boys Pete, Firkle and Michael. A selfie can be taken with her after completing the quest to initiate a black magic spell sourced online by Michael. Apart from that, she plays no further role in the story line.

However, in the South Park: The Fractured But Whole DLC From Dusk till Casa Bonita, she plays a more significant role, joining up with The New Kid to take down the Vampire Kids at the Casa Bonita eatery, where she is seen having a meal with her parents; she will be unlocked as a Combat Buddy in the process, also she will be included as a party member for the main storyline in past and future save games. If Henrietta, despite not showing up in the main game cut scenes, is picked anytime for combat she will have dialogue based around the events where the battles take place. This also alludes to character banter between other superheroes rather than just The Coon and Mysterion. However, while she does comment on other characters, only The Coon, Mysterion and Mintberry Crunch will directly talk to her and make comments about her abilities.

Henrietta is a ranged combat buddy, having abilities which covers a wide range. She acts as a great party backer, as her abilities provides advantageous buffs to party members or even herself.

Henrietta's Satanic Seal ability is one of the best support abilities around, as it gives an attack boost, provides protection and removing any status effects to a targeted member or even herself, providing a massive edge in combat. Her Baleful Blessing ability also provides great support, providing heal to a targeted member or even herself, and a lifesteal attack for further healing if any enemies are within range.

Henrietta's Ultimate Ability, Black Mass can be considered one of the most devastating Ultimate abilities among all the party members that can be picked; it is a lifesteal attack that applies damage to all enemies in the battlefield while healing all allies in the process.

The downside to her is that she has one of the lowest health bars of any ally, so she's far more likely to be picked off by powerful enemies such as Morgan Freeman fairly quickly. And in trade for her buffing abilities, she lacks the ability to do much damage as two of her abilities don't deal any direct damage at all.

Henrietta seen having dinner with her parents in Casa Bonita.

Henrietta trying to point the difference between her and a Vampire Kid.

In-game notification of Henrietta being available for all saved games.

Henrietta attempting to open the 'Vampire Lair' door with Mysterion and The New Kid.

Henrietta exclaiming when Corey Haim made his appearance.

Henrietta witnessing The New Kid diving off the man-made cliff in Casa Bonita.

Henrietta unlocked as a Combat Buddy. 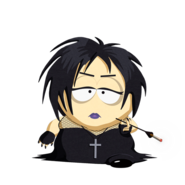 Retrieved from "https://spgame.fandom.com/wiki/Henrietta_Biggle?oldid=35848"
Community content is available under CC-BY-SA unless otherwise noted.