The South Park Game Wiki
Register
Don't have an account?
Sign In
Advertisement
in: Characters, Male characters, Characters in South Park: The Fractured But Whole,
and 7 more

Human Kite from an Alternate Universe

Human Kite from an Alternate Universe

Parchment of the Torah
Human Kite from an Alternate Universe is a character in South Park: The Fractured But Whole, he is the superhero alter-ego of Kyle Schwartz.

His appearance is similar to Human Kite's. He wears a dark green t-shirt with a multi-colored kite on it and a grey hood and the hood is vaguely kite shaped. A small red and yellow kite resides at his head.

Personality wise, unlike most kids in South Park who swear all the time, he doesn’t let out curse words at all, implies a strong sense of civilization. He also has a strong sense of self protection, being able to identify all kinds of illnesses he catches, and calls for help, this habit annoys many others.

Kyle originally goes to South Park from Connecticut to stay two weeks with his cousins, his uncle and his aunt. He inmediatly starts to copy everything the Human Kite does, and starts calling himself "Human Kite from an Alternate Universe", much to Human Kite's annoyance, however, he can't do anything about it, because his mother has told him to be do what his cousin says in order to be a good host.

When The New Kid goes to Human Kite's house to help him out, he informs them about his situation with The Human Kite from an Alternate Universe, and asks them to beat him up so he will go back to "his own universe at the East Coast". The New Kid does as they are told, while encountering some difficulties, as Human Kite 2 cheats during combat. After beign defeated, Human Kite from an Alternate Universe decides to "go back to his universe".

The next day, after meeting up with Fastpass and CLASSi, Human Kite calls the New Kid and tells them that his cousin is back and asks them to come to his house to kick him out again. The New Kid goes to the Broflovski's residence, where they find Sheila and Human Kite, the latter one asks them to beat him up once again, as he can't do it himself, otherwise he will be in trouble with his mother. The New Kid calls Coon and Friends for assistance and together, they defeat Human Kite from an Alternate Universe, however, he refuses to go down and tries to summon the power of the wind in order to defeat his enemies, but the only thing he achieves is that his kite gets stuck on the top of a tree. After that, he tells his aunt that the superheroes are picking on him, much to Sheila's anger. She joins the battle along with her nephew and her son later on. After defeating the Broflovskis and getting Human Kite 2's kite back, Sheila calms down and both her and her nephew agree to take a selfie with The New Kid, however, Sheila makes the kids promise that they will let Human Kite from an Alternate Universe play with them from time to time.

After the incident is over, Human Kite from an Alternate Universe will appear from time to time to battle alongside Coon and Friends and The Freedom Pals, interrupting the battle (and sometimes stealing a turn) for both "allies" and enemies. He will either trip and get a nosebleed, try to fire his laser but failing in the process, or use his Sheild of David and then will leave, much to the kids' annoyance, who will all stare angrily at him.

Some days later, Mitch Conner, in an attempt to clone the New Kid by using one of their parents' organic DNA, fails to achieve his goal and kidnaps Human Kite from an Alternate Universe, takes him to Dr. Mephesto's Genetic Engineering Ranch and transforms him into a giant mutant as an alternative to cloning The New Kid. Human Kite 2 buys Mitch Conner and The Coon enough time to escape back to South Park and leave The Freedom Pals to battle the Alternative Human Kite. They survive and defeat him, however, it comes with the cost of advancing a lot of days into the future where Mitch Conner has already defeated Mayor McDaniels and has taken over the position of mayor.

After the game ends and Mitch Conner dies, Newspapers on South Park will say that the town's synagogue has intensified the search of a missing boy, this boy is most likely Human Kite from an Alternate Universe, implying that he was never seen again after what happened at Dr. Mephesto's lab.

He is later seen in Casa Bonita having dinner with his family (with the exception of Ike) and serves as a reemplacement for Human Kite's farkour, as he is not wearing his superhero costume and can't assist the New Kid without it.

He is relatively weak the first time you see him, with seemingly one attack but with various make-up abilities later. He is also a turn thief.

Fights with the New Kid for the first time.

Fights with the New Kid and Coon and Friends for the second time. his aunt Sheila helps him this time.

The Talk 2: The Gendering

Interrupts Coon and Friends' battle with the Rednecks.

Interrupts Coon and Friends' battle with the Security Guards and their dogs.

Interrupts The Freedom Pals' battle with the Old People.

Gets turned into a Mutant by Mitch Conner and tries to kill the Freedom Pals. but is stopped by The New Kid's Time Fart.

A holographic form of Human Kite from an ALternate Universe appears as one of the enemies that must be defeated in the "Scorched Earth" challenge of the Danger Deck. He teams up with Mr. Kim, the Security Guard, High Jew Elf Kyle and a Many Assed Sixth Grader Porcupine.

Is seen having dinner with his cousin, his uncle and his aunt. Serves as a reemplacement for Human Kite's farkour during the mission, as he is unavailable at the moment. 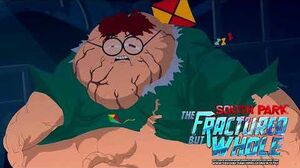