The South Park Game Wiki
Register
Don't have an account?
Sign In
Advertisement
in: Characters, Minor Characters, Kindergarteners,
and 13 more

Ike Broflovski is a minor character in South Park: The Stick of Truth. He is the leader of the kindergartner pirates.

Ike wears a pirate hat and has anchor tattoos on his arms and a skull tattoo on his stomach.He wears blue shorts, black shoes and has a belt around his waist with a dagger.

In South Park: The Fractured But Whole, Ike is seen in his regular outfit, wearing a dark green shirt with a sailboat image in front, black pants and blue sneakers. In one of the posts in Coonstagram, he can be seen in his light blue pajamas.

Ike's only contribution in South Park: The Stick of Truth is helping in the attack on Clyde's Fortress at the end. He is attacked by a Cyclops while trying to set off fireworks. He friends the New Kid if he sets off the fireworks for him. He can always be found at the playground on the pirate ship.

In South Park: The Fractured But Whole, Ike is ever present in his own bedroom inside Kyle's House, playing with his computer. A selfie can be taken straight away with him without any pre-requisites.

He plays no role in the game's storyline. 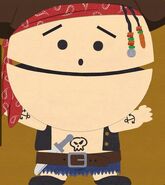 Ike as a pirate. 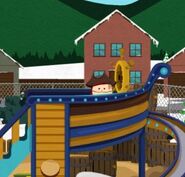 Ike at the playground where he is usually found. 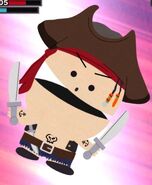 Ike being kicked toward a target.

Ike trying to clear the path to the tower in "Beat Up Clyde".

Ike crying after being beaten up by Clyde's cyclops.
Community content is available under CC-BY-SA unless otherwise noted.
Advertisement