The South Park Game Wiki
Register
Don't have an account?
Sign In
Advertisement
in: Stub articles, Enemies, Game only characters,
and 12 more

Jake is Monica's boyfriend and an enemy during Pose as Bebe's Boyfriend.

During Pose as Bebe's Boyfriend, Jake is fought as a miniboss. Despite this, Summons will work just fine on him. He isn't all that hard and players should have no problem beating him, mainly due to his lack of abilities. 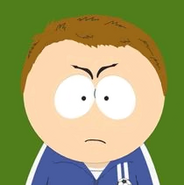