The South Park Game Wiki
Register
Don't have an account?
Sign In
Advertisement
in: Girls, Minor Characters, Characters,
and 5 more

Girls
Jessie is a minor character in South Park: The Stick of Truth.

Jessie is a member of the Girls' Club. She befriends the New Kid after he completes the girls' quest, commenting that he must be thinking about something totally deep right now. 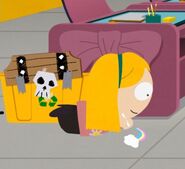 Jessie drawing on the floor in chalk.
Community content is available under CC-BY-SA unless otherwise noted.
Advertisement