The South Park Game Wiki
Register
Don't have an account?
Sign In
Advertisement
in: Characters, Adults, Merchants,
and 15 more

Adult
Jimbo Kern is a merchant found in South Park: The Stick of Truth.  He is found at Jimbo's Guns, where he sells weapons, armor, and strap-ons with Ned Gerblansky.

Jimbo wears an orange hat, a green vest, orange shirt and brown trousers. Unlike most adults, he has no nose. 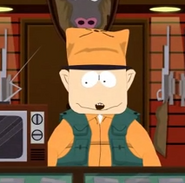