The South Park Game Wiki
Register
Don't have an account?
Sign In
Advertisement
in: Humans, Characters, KKK Members,
and 23 more

Kenny McCormick is the princess at Kupa Keep. He is one of the six playable partners, later the hidden main antagonist of South Park: The Stick of Truth.

For Kenny's role in South Park: The Fractured But Whole, see Mysterion.

Kenny wears a purple and white dress, gold shoulder pads, white gloves, and his orange parka that covers most of his head. He has a blonde female wig on with a gold tiara.

Princess Kenny becomes an ally after starting Detention Sentence. Princess Kenny has some decent abilities and an unusual Buddy Ability, which allows her/him to use her/his Double D Buddy Power to Charm just about anyone into giving her/him access to any area. In battle, (s)he has moderate power with her triple striking basic attack and powerful abilities, but cannot do any melee attacks, rendering her/him useless against Reflecting enemies if his/her PP is too low. Her/His abilities are powerful and debilitating, capable of Gross Out, Bleed, and hitting multiple enemies; but has the downside of Kenny dying for a whole 2 turns if (s)he fails two of them (Furry Friends and Unicorn Stampede) or runs out of HP. 2 turns after (s)he dies, (s)he revives her/himself with full HP and PP. In the end, her/his usefulness is dependent upon how good players are with the timing of her/his attacks. While Kenny is "dead" for those 2 turns, you cannot revive them with a Revive Potion, or switch out your Buddy. If you lose all of your HP while Kenny is in the middle of the reviving period, it is still a Game Over.

Kenny is a buddy character that can be used in combat. (S)he uses a bow and arrow which, when the button combination is pressed perfectly (two A / X presses in time with the love hearts), shoots three arrows at the enemy. His specials are usually references to particular deaths that have happened in previous episodes.

Unlike the other buddy characters, when Kenny dies in combat, he really does die (as opposed to being incapacitated like the New Kid and the other buddies) but comes back revived two turns later. Also unlike other characters, failure to execute a special move perfectly results in an instant death (but the move still takes effect).

Kenny is on Cartman's side of the game/conflict, and you first get him as a buddy when Cartman sends you to rescue Craig. His 'Buddy Command' ability, and power in combat, is to flash his breasts at the enemy, thereby distracting them. Outside of combat this is used to trick enemies into opening pathways which would otherwise be inaccessible.

Kenny is not a major character of the plot until the final fight of the game, where he takes the Stick of Truth for himself, after hearing from Morgan Freeman that he is the true inheritor of the Stick of Truth. Upon being defeated once by the player, he drinks the Nazi Zombie serum, and becomes a Nazi Zombie. From here, the player has to defeat Kenny three more times (he revives to full health each time) before it is decided that you must break the "gentleman's oath" (not to fart on a man's balls), and finish him off with a fart spell.

Kenny returns to normal after this and Butters says that Kenny's blaming it on PMS. 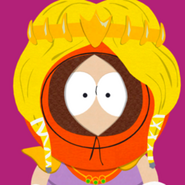 Princess Kenny in "The Giggling Donkey".

Princess Kenny as a Nazi Zombie. 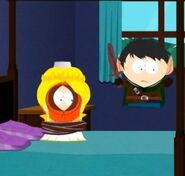 Kenny being "raped" by a drow elf. 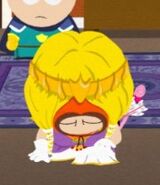 Kenny indicating to the player to use the buddy command. 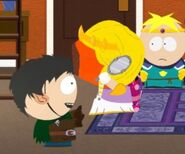 Kenny with the army before the siege on Clyde's fortress. 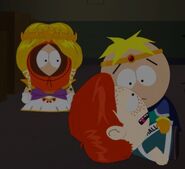 Kenny with Butters and a ginger hall monitor.

Kenny with Morgan Freeman and the Big Bad Government Guy. 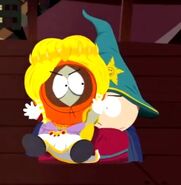 Kenny being restrained so the player can fart on his balls. 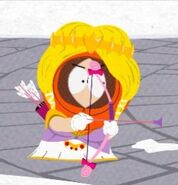 Kenny in battle, with his/her bow and arrow.