Kevin wears a blue Star Trek shirt with his hair cut to match Spock, along with Spock's ears.

In South Park: The Fractured But Whole, Kevin is seen in his original outfit, wearing a light blue jacket with a red collar and black pants, also his hairstyle is back to its original unkempt look. At the beginning of the game though, he plays as a Moorish fighter, adding a bicycle helmet attached with faux horns to his usual outfit.

In South Park: The Stick of Truth, Kevin plays a minor role, in which he can be recruited into the army to battle against Clyde after finding his iPad. He then later joins in the siege against Clyde, although he stands out as an odd one out due to him wearing a Star Trek outfit whereas the other kids are wearing Medieval age outfits.

In South Park: The Fractured But Whole, Kevin acts as a rebel against the Kupa Keep, laying siege on the place as a Moorish warrior, detaining Jimmy the Bard and interrogating him on the whereabouts of the Stick of Truth. However, when Eric Cartman arrives in his superhero persona, he was then told by Cartman that they're no longer playing their fantasy role-playing game, leaving Kevin standing dejectedly inside Kupa Keep.

Kevin is then seen outside, clearing up the streets after their role-playing game has been ended. A selfie can be taken with him after gaining a number of followers in Coonstagram. On later days in-game, he is seen inside his house, playing with a Virtual Reality headset, playing no role in the game's storyline. 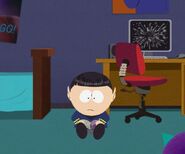 Kevin in his bedroom. 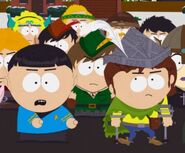 "Let us charge our shields and use photon torpedoes to vaporize the Klingons!"