The South Park Game Wiki
Register
Don't have an account?
Sign In
Advertisement
in: Characters, Drow Elves, Buddies,
and 21 more

Kyle Broflovski is the leader of the Drow Elves and is one of the six playable partners in South Park: The Stick of Truth. His official title is High Jew Elf King Kyle.

For Kyle's role in South Park: The Fractured But Whole, see Human Kite.

As for his Role in Phone Destroyer, see Gunslinger Kyle, Bounty Hunter Kyle, The Master Ninjew, Kyle of the Drow Elves, and Human Kite (Phone Destroyer).

Kyle retains most (if not all) of his regular outfit, with the addition of a crown of twigs over his hat. He also dons a red robe with gold trim and Elven markings over his regular orange jacket.

Kyle becomes available as an ally after "Defeat the Underpants Gnomes" is completed. He is an above-average ally, with many powerful attacks and high HP, including his Holy-infused basic attack like with Butters when done Perfectly. His special attacks can be difficult to pull off correctly, but are highly rewarding when mastered. In the end, Kyle makes an excellent end-game ally, but low reaction time is easily punished when using him. 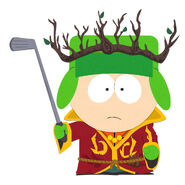 Kyle at the Elven Kingdom. 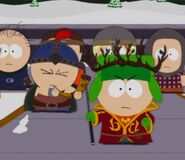 Kyle with a ginger hall monitor. 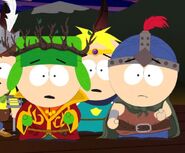 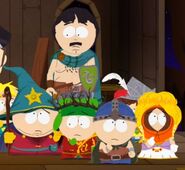 Kyle with the others, wondering who can make themselves really small and perform abortions. 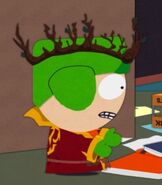 Kyle trying to get the New Kid back on his side. 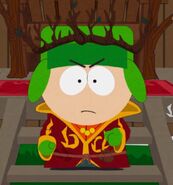 "If you betray us, we'll tell everyone...you're a butthole." 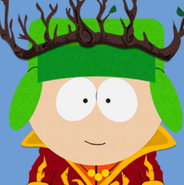 Kyle with Stan and Cartman looking at the abortion records.

Kyle and Cartman leading the siege on Clyde's fortress.