The South Park Game Wiki
Register
Don't have an account?
Sign In
Advertisement
in: Stub articles, Characters, Adults,
and 7 more

Dr. Martin Poonlover is a character in South Park: The Stick of Truth and is a doctor who works at Unplanned Parenthood.

Dr. Poonlover wears a dark blue shirt and pants. He also has black hair and visible wrinkles on his face. 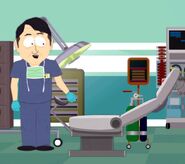 Dr. Poonlover in his operating room.