The South Park Game Wiki
Register
Don't have an account?
Sign In
Advertisement
in: Enemies, Characters, Minor Characters,
and 13 more

The Meth Tweakers are drug dealers who provide shipments to Tweek Bros. Coffee of what is presumably meth. They reside in the McCormick Guest House (actually a garage).

All of the Meth Tweakers look somewhat run down from the effects of drug use and other drugs and wear somewhat baggy clothes and no footwear of any kind.

The New Kid meets them in Hot Coffee when Tweek Tweak sends them to get the shipment for the day so he can return to Kupa Keep quicker to assist Cartman. Because the New Kid is not the usual kid, they jump to the conclusion that the New Kid is a cop and attack him, but are quickly defeated. 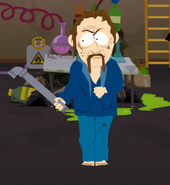