The South Park Game Wiki
Register
Don't have an account?
Sign In
Advertisement
in: Characters, Minor Characters, Girls,
and 9 more

Girls
Monica Ryland is a character is South Park: The Stick of Truth.

Monica wears a light green jacket with white buttons, a matching green skirt, and black shoes. She ties her brown hair in pigtails. She also has little freckles under her eyes.

When the New Kid goes to seek the girls' help, they are too distraught over an urgent matter concerning Monica to consider his request. They send him to pose as Bebe's long distance boyfriend to see if Monica hits on him, proving whether she is a two-faced bitch. When she does, the girls appear with her boyfriend Jake, who attacks the New Kid. Afterwards, she apologizes and befriends the New Kid. Eventually, the girls find out that she couldn't have been the two-faced bitch, and send the New Kid to find the real perpetrator.

Monica, Jake, Wendy, Bebe, and Red with the New Kid at the park. 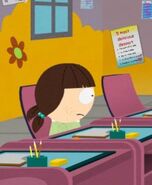 Monica at the Pleases and Sparkles Club.
Community content is available under CC-BY-SA unless otherwise noted.
Advertisement