The South Park Game Wiki
Register
Don't have an account?
Sign In
Advertisement
in: Mages, Characters, Summonable Characters,
and 14 more

Mr. Hankey is a piece of feces with three lumps and wears a Santa hat and white mittens. When summoned into battle, he replaces his Santa hat with a wizard hat and puts on a red wizard robe with a golden belt (similar to Mickey Mouse's outfit from Disney's Fantasia).

In South Park: Phone Destroyer, his appearance is the same, but with rosy red cheeks. 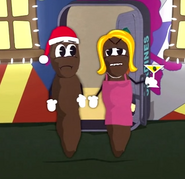