The South Park Game Wiki
Register
Don't have an account?
Sign In
Advertisement
in: Gameplay, Classes, South Park: The Fractured But Whole, DLC

Netherborn is an additional class in South Park: The Fractured But Whole. It is obtained at the beginning of the From Dusk till Casa Bonita DLC mission.

Mysterion is classified as a Netherborn in-game.

The Netherborn specializes in dealing damage to multiple enemies. Primarily, its attacks inflicts direct damage, however some of its abilities inflicts status effects.

One of the Netherborn's stand out abilities is the Ghastly Grasp, where it inflicts chain damage to all enemies within a 3-column tile area. The ability Dire Shroud has a double-edged effect, where it can be applied to a specific target in the entire battlefield. If the ability's applied onto itself or any ally, it provides a healing and protection buff, while if the ability's applied onto enemies, Defense Down will be inflicted onto the targeted enemy.

The Netherborn's Ultimate ability, Grim Fate is a potential game changer - when summoned, it inflicts Chilled to any enemies within an all-round radius (8-tile), and for the next three turns a boosted version of the Netherborn's default ability set (Soul Slash, Ghastly Grasp, Dire Shroud) will be applied, overriding any abilities set for the battle pre-launch of the Ultimate.

All statistics below are under Heroic difficulty, for other difficulties, still blank.

The percentage in "Damage" (or Protection) is the correspondent percentage of the Attribute.

Mysterion channeling his Netherborn powers to The New Kid.

The Netherborn powers equipped to The New Kid 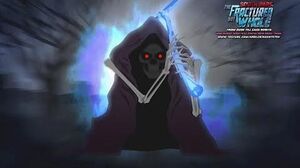