The Pedophile Cameraman is a character in South Park: The Stick of Truth.

The Pedophile Cameraman has brown hair, a blue jacket with a white shirt underneath, blue pants, and brown shoes.

His only "attack" is taking pictures of you while in your underwear. It doesn't do any damage at all, except to your dignity, making physical damage impossible.

When the New Kid goes to Photo Dojo to obtain a passport photo in order to get into Canada, the cameraman urges them again and again to take off his clothes, until another cameraman intervenes after he asks for his underwear to be removed and the New Kid fights him. 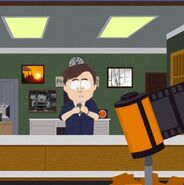 The Pedophile Cameraman at the counter in Photo Dojo.

"Yes, very nice. How about we lose the underwear?"

Another cameraman shouts at the player to stop him.