The South Park Game Wiki
Register
Don't have an account?
Sign In
Advertisement
in: Characters, Minor Characters, Adults,
and 9 more

Adults
Richard Tweak is a minor character in South Park: The Stick of Truth. He is Tweek Tweak's father and runs Tweek Bros. Coffee.

Richard plays a minor role in "Call the Banners", telling the New Kid where to find Tweek and allowing Tweek to play after he receives the delivery. He also sells the New Kid consumable items and befriends the New Kid along with Mrs. Tweak when the player purchases a Speed Potion Ultra from his shop. 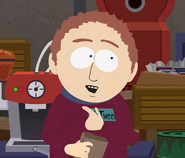