The South Park Game Wiki
Register
Don't have an account?
Sign In
Advertisement
in: Characters, Minor Characters, Adults,
and 7 more

Adults
Rick is a character in South Park: The Stick of Truth.

He has no role outside the story, apart from the being the clerk at Bijou Theatre. If The New Kid walks past him, he will say some lines, with most of them about him taunting The New Kid that's he too young to see Terrance and Philip: Asses of Fire 2.

Later in the game, during Nonconformist, he gets infected with the Nazi Zombie virus and becomes one of them until the game is completed. Unlike other Nazi Zombies, he cannot be fought and stays in the same place throughout the entire game. The lines he says before to tease the New Kid about how he couldn't see the new movie will be replaced by the generic Nazi Zombie speech. You can go inside the theater but you won't be able to see the actual movie. The only sounds you will hear are the Rob Schneider movie trailers.

In Fractured But Whole, he will only ever say "Aren't superhero movies kind of played out?" if the New Kid tries to speak with him, however he does have more lines if you engage in combat with the Chaos Kids waiting outside, where he will proceed to comment on the battle saying things like how he believes they're cosplayers, that he'll call the real Farting Vigilante, and questioning whether special effects or CGI was involved. 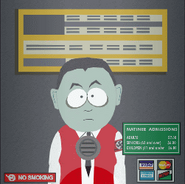