The South Park Game Wiki
Register
Don't have an account?
Sign In
Advertisement
in: Characters, KKK Members, Humans,
and 13 more

Scott Malkinson is a character in South Park: The Stick of Truth and tends the massive stables of Kupa Keep , as well as the armory following Clyde's banishment. He has the power of diabetes, which is mostly a curse.

For Scott's role in South Park: The Fractured But Whole, see Captain Diabetes.

Scott wears a green shirt and blue pants.  He has a dark green cape with matching headband and belt around his body.  On the belt, he has bottles of white liquid and needles, also filled with white liquid.  As he has diabetes, it is likely they are full of insulin.  He has messy brown hair, freckles under his eyes, and is almost always sticking his tongue out.

Scott Malkinson serves very little role in the story outside of being the stable tender and after Clyde's banishment, the merchant of the Kingdom of Kupa Keep. He also friends the New Kid on Facebook and is often left behind to guard the Kingdom. 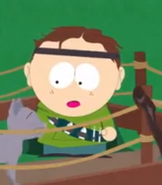 Scott with Mr. Kitty at the stables.

Scott getting beaten up by a drow elf.

Scott at the armory. 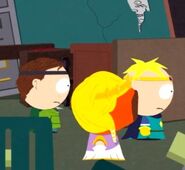 Scott with Butters and Kenny during "Attack the School".

Scott being used as target practice.

Scott with the other humans and elves.

Scott before the siege on Clyde's fortress. 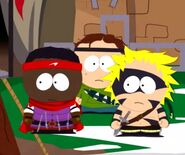 Scott with Token and Tweek at Kupa Keep.
Community content is available under CC-BY-SA unless otherwise noted.
Advertisement