The South Park Game Wiki
Register
Don't have an account?
Sign In
Advertisement
in: Characters, Characters in South Park: The Fractured But Whole, Villains,
and 4 more

Shub-Niggurath is a boss character in South Park: The Fractured But Whole.

Shub-Niggurath appears in the game as an Elder God that rests under the police station. The South Park Police Department has been hunting for African-Americans across the town to sate her vast hunger...and also because they're horribly racist.

However, Shub-Niggurath has one crippling weakness, revealed by CLASSi; she can't stand "white meat". The united forces of Coon and Friends and the Freedom Pals use this to their advantage by tricking Shub-Niggurath into eating her own cultists, eventually causing her to explode in a shower of gore.

Shub-Niggurath is fought at the end of the Police Station during The Thin White Line. As an Elder God (or goddess), she is tremendously powerful, being completely immune to any of your attacks and armed with two instant-kill moves. However, her dietary habits can be used against her; when she uses her Devour move to catch a victim, she can be healed or harmed depending on the quality of the flesh.

Note that any devoured heroes will eventually be spat out of Shub-Niggurath, but they'll be unconscious and in need of an immediate revival. Also, black kids won't be regurgitated unless at least one white victim was also devoured in the previous Dormant phase.

Shub-Niggurath has two distinct phases that she will cycle through for the entire battle; an enraged state and a dormant state. Both forms rely heavily on summoned minions to force the heroes into range of her powerful telegraphed attacks.

After consuming white meat (including at the start of the battle, thanks to CLASSi), Shub-Niggurath will burst out of her pit in a blind fury. At this point, she will begin readying a real-time attack; a lethal tentacle slam that hits the four columns nearest to her. Obviously, you want to be out of those columns well before the attack comes, but the Elder God's cultists won't make that easy.

The objective of this phase is to get as many heroes as you can to the two leftmost columns of the battlefield before Shub-Niggurath's attack meter fills up; when it does, the All-Mother will interrupt the current turn to inflict a knockout blow on anyone in range. The cultists will attempt to block your path, using the occasional knockback move to force you closer to their goddess; moves like Coon Lunge or Blind Side are the quickest way to circumvent this, but simply beating up the goons works pretty well.

The battle shifts to Phase 2 once Shub-Niggurath's meter is full.

After smashing the battlefield with her mighty tentacle, Shub-Niggurath will spit out two pulsating eggs from one of her mouths (as well as any heroes that she devoured in her previous Dormant phase). The eggs will land on random squares near the middle of the battlefield; they have 1 HP and no attacks on their own, but they also explode when damaged, knocking back anyone directly adjacent to them. After "ovulating", the Black Goat of the Woods will retreat into her pit, with only several tentacles being visible.

In this phase, Shub-Niggurath's only move is Devour, a telegraphed attack that covers the two rightmost columns of the battlefield. Any humans in the danger zone will be consumed on the boss's turn, healing or harming her depending on their size and race. Obviously, your goal should be forcing the cultists into the Devour range; knockback effects from your heroes or Shub-Niggurath's own eggs are the best way to do so. Chill and Slow effects are also useful for keeping the enemies from fleeing the boss's range until it's too late; on the other hand, Gross Out, Bleeding, Burning, and Shock will only make things harder by chipping away the cultists' health before you can knock them back.

After catching someone with Devour, Shub-Niggurath will re-emerge as more cultists arrive to force the team towards her (including Sergeant Yates, the first time this happens). From here, the battle returns to Phase 1, looping until either you or the boss are defeated. 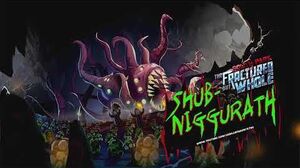