The Brazilian version of the N64 game was published by Gradiente, which translated the game into Portuguese. On January 13, 1999, Acclaim announced a sequel to South Park for release in 2000 on N64, though no further information was given and it was never released.

A malevolent green comet of combined evil blasts across the universe towards Earth and flies through the town of South Park. The comet causes several major occurrences to befall the town and it is up to the boys to destroy the evil created from it, their first problem is wild rampaging turkeys.

Mutant Turkeys have returned and are now invading South Park, the boys must head through a Renaissance Fair until they reach Chef's Love Shack. Chef then tells them of Tank Turkeys and how they birth more Mutant Turkeys, he then tells them to head through the tunnels and up the mountain until they reach his other love shack where Chef tells them of their sinister nest made throughout the complex tunnels of the Volcano after it exploded. The boys scale the nest and discover the Mother Turkey, after distressing it to leave the boys follow and destroy the mother turkey before it can reach town, they then return home and eat Thanksgiving dinner outside the school.

A Clone of Your Own

Chef informs the boys of a mysterious green glow near the Warehouse Docks and asks them to investigate, they then discover that Big-headed mutants have been the source of the glow and that there are several clones of residents (such as Big Gay Al, Officer Barbrady, Jimbo Kern, and Dr. Mephisto) from the town, the boys then find Chef outside the small warehouse and discuss the problem, the boys then resolve to destroy the clones in the warehouses, after destroying the clones, they reach the last warehouse and see the clones have been falling down from the second floor of the warehouse, they then discover a strange machine and destroy it which destroys the entire warehouse. Chef then informs the boys the next day that the true source of the clones has been coming from an art museum in town, the boys then fight their way and discover the grotesque Mother Clone Blob,  then they destroy it and rejoice at the dead clone monster.

Close Encounters of a Bovine Kind

Visitors have returned to South Park and are now wreaking havoc, the boys travel the open fields and discover that aggressive cows and flying spaceships are all over the mountains, then destroy them and head back to South Park. The boys talk to Chef and must head out to the distant Craterville, where alien activity is highly prominent, the boys head there and discover the ville is overrun with aliens, they then find the mother-ship and must take down several aliens until they find the key. They then traverse the inner mother-ship and defeat several stronger aliens along the way, they then discover the violent electrical core and destroy it.

Something Wicked This Way Clunks

Robotic Televisions have begun appearing in South Park and Chef informs the boys that the Seismic Center has been picking up several disturbing signals, the boys head to the center and discover several telebots destroying it. The boys traverse several rocky grounds to get to Ned Gerblansky & Jimbo Kern's Militia Camp, which has been overrun by the telebots, then discover Ned & Jimbo have been captured and imprisoned in a cliffside robot factory, they navigate the treacherous halls of the factory and come into a boss battle with the head robot (powered by Mr. Hat) they destroy the robots and rescue Ned & Jimbo, who are thankful for it, the head of a robot falls on Kenny McCormick and squishes him.

The comet's visit to South Park is coming to an end tonight, but Chef tells the boys that there is one last problem, Killer Toys are on the loose and rampaging the streets, the boys then fight their way down to the Toy Store Parking Lot, where more toys are slowly bred by Jack-in-the-boxes, then destroy the Toy Tanks and enter the Toy Store where several toys are lurking through its shelves, the boys destroy the Tanks guarding the doors to the next rooms. They then come face to face with the final boss: The Ultra Mega Man, the boys put up a valiant effort and destroy the amazing toy boss.

The credits then roll. In the N64 Version, the South Park versions of the cast and crew appear as a backdrop. In the PC version, it shows a replay of level 1.

The game is a first-person shooter. The game's single player mode places the player in control of one of four characters: Cartman, Kyle, Stan, or Kenny. The player must defeat a variety of enemies using the various weapons found throughout each stage. The player has a total of 100 health, whenever they are attacked by an enemy then lose some health, losing all health causes a Game Over and a high score screen to appear if the player has many points, the player can gain health by finding Cheesy Poofs boxes littered around the stages, there are also Snacky Cakes boxes which fully restore health but are rare to find, there are also Beef Cake cans which grant invisibility, finally, there is armor in the form of football pads, which protect the player and instead deduct armor points instead of health points.

Innocent creatures are spread around the levels of story mode. Killing an innocent creature costs the player a hefty amount of points, in one instance, Officer Barbrady can be found in the Toy Store parking lot and is killable.

A multiplayer mode is made available for the player and other friends to play, access to multiplayer cannot be granted unless there are two controllers connected to the console. For the PC version, multiplayer was changed to be online.

The players have a choice of several characters from the show. The boys will always be default to the selection. To unlock more characters the player must play through the entire Story Mode to discover codes which unlock the characters. There are several stages to choose from, some basic while others are high priority death traps, there also also choices of game-styles to choose.

Additionally, some weapons found in the Story Mode can be successfully used only in Multiplayer whereas it was useless in Story Mode, these include: Cow Launcher (A successful hit K.Os the player with a hilarious shot of the Cow's anus), Warpo Ray's 3rd function (Causes the player to turn into an animal) and the Alien Dancing Gizmo (Causes the player to act out the song Cartman sang in the original episode of the show).

The game was developed by Iguana Entertainment, best known for the Nintendo 64 game Turok: Dinosaur Hunter and its three sequels. It was developed concurrently with Turok 2: Seeds of Evil, and shared the same game engine and some of the development staff. The game's composer, Darren Mitchell later bemoaned it as being "not a fun project" in part due to the Nintendo 64 being difficult to work with, and also because of the extremely fast development time forced on the development team by publishers Acclaim, who wanted the game released in time for Christmas 1998.[1]

A version of the game was also in development for the Nintendo GameBoy Color by Acclaim Entertainment. However, it was cancelled by Matt Stone and Trey Parker due to demographic incompatibilities between Nintendo's handheld and the show. The one prototype version of the game is said to belong to Matt and Trey. The game's source code and frameworks were reused in other GameBoy games later in the year.[2]

The prototype was released on August 8th, 2018.

Upon release, the PC and PS1 versions of South Park were received poorly by critics. GameRankings has only 41.22% as the average score for the PlayStation version and the PC version has the average score 51.72%. GameSpot gave the PlayStation version a 1.4, stating that "South Park is definitely one of those games that is bound to come up when you start thinking about the worst game you've ever played." IGN called the PlayStation version "frustrating" due to poor graphics, repetition of the voice acting, and lack of play value for the head-to-head mode. GameSpot stated in the PC version that "A good license and good graphics aren't enough". The voice acting, done by the original voice actors, was criticized for being repetitive, isolated, and old. The weapons of the game were also criticized for being unprofessional.

Despite the negative reception from both versions, the Nintendo 64 version was praised for its 3D graphics and nice storyline, with IGN calling the game "just as funny as the Comedy Central series". GameSpot stated in the Nintendo 64 version that the level design "it's really not very good on its own, but given the license, it at least makes sense".

On the DVD commentary for the episode "Starvin' Marvin", Trey Parker called it the "crappiest video game", mostly because of the first level where you repetitively shoot hordes of turkeys. Like most of the South Park merchandise released at the time, Parker also mentions that he was "bummed out" about it. Because of this, Trey and Matt haven't agreed to the development of many videos games since. 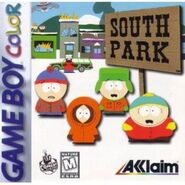