The South Park Game Wiki
Register
Don't have an account?
Sign In
Advertisement
in: Characters, Drow Elves, Humans,
and 21 more

Stan Marsh is a warrior from the Drow Elves and is one of the six playable partners in South Park: The Stick of Truth.

For Stan's role in South Park: The Fractured But Whole, see Toolshed.

As for his role in Phone Destroyer, see Stan of Many Moons, Program Stan, Poseidon Stan, Stan the Great, and Toolshed (Phone Destroyer).

Stan dons a studded blue helmet with a red feather coming from the top (mimicking the red puff-ball of his original hat). He wears grey-white bands around his wrists and a brown belt over a sleeveless brown shirt and blue pants. In battle he is shown wielding his personal sword.

Stan becomes available as an ally once the New Kid is captured during the quest Recruit the Goth Kids. Outside of battle, he can call upon Sparky to pee on electronics to short them out, or make puddles of water larger.

In battle, his attacks usually hit multiple enemies - his sword attack is unique in that it hits all enemies in a column, allowing him to attack hiding enemies. His buddy ability can be used to dispatch dead enemies easily given it deals a bit of damage, making encounters with reviving enemies like Nazi Zombies easier. He also boasts the highest HP of all the buddies without the crippling priority Butters has, ensuring he can survive powerful hits without dying instantly.

Stan has notable weaknesses, however. He doesn't have a lot of PP to use his abilities, limiting his damage potential without items. Additionaly, he lacks a true single-hit or single-target attack, and his attacks rely on good enemy placement. While his standard sword attack is impressive in damage, these flaws make Stan poor against bosses and highly armored enemies.

In the end, Stan is a great buddy for those who don't like spending PP to do a lot of damage and great for those wanting to inflict damage to multiple foes. 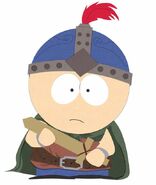 Stan, Kyle, and Chris Donnely at the Elven Kingdom. 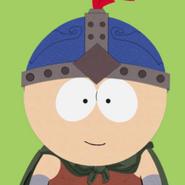 Stan at the Elven Kingdom, giving the player his side quest. 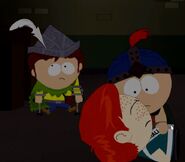 Stan and Jimmy with a ginger hall monitor exposed to the green goo.

Stan friending the New Kid after completion of "The She-Ogre". 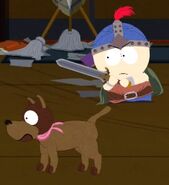 Stan with Sparky, fighting the New Kid during "Attack the School". 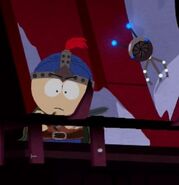 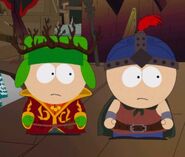 Stan and Kyle during "Betrayal from Within".

Stan is not present until about halfway through the game, when you are brought to the Elven Kingdom. Despite being a main character in the show, he has a relatively minor role in the story. He is either a boss or a buddy when you attack the school and helps to attack Clyde's Fortress. He also helps in the final boss fight.