The South Park Game Wiki
Register
Don't have an account?
Sign In
Advertisement
in: Main Quests, South Park: The Stick of Truth Quests

Bow of Sucking
This is the first quest you receive in South Park: The Stick of Truth. It is started as soon as you create your character and watch the cutscene with your parents.

You're the new kid in town. You are told to go make friends. You find Butters, who takes you to meet the Wizard King, Cartman. He shows you around Kupa Keep and shows you the Stick of Truth. Suddenly, drow elves attack, and you must fight them off. Afterwards, you learn Clyde has failed to stop the elves from taking the stick. Cartman tells you to go find his three best warriors: Tweek, Token, and Craig, and bring them back.

Your parents are moving boxes around downstairs. They are excited to move, but worry that "they" will look for you. They come to the agreement they won't, and go upstairs to greet you. There, they ask if you remember what happened, which you don't respond to. Relieved, they tell you to go make some friends. Head to the door and open it. Follow the hallway to the right and down the stairs. The front door is just past your dad in the living room.

Outside, Butters is being attacked by a drow elf. Approach the elf and hit him, causing him to run away. Butters befriends you and brings you to meet the Wizard King. Follow him to Cartman's house, where you will be greeted at the door. Follow Cartman through his house and outback to Kupa Keep.  He shows you the weapon shop and stable. Approach him again and he will ask you your name, which regardless of what you put will be Douchebag, and your class (Fighter, Mage, Thief, or Jew).

Cartman tells you to buy a weapon from Clyde, and then teaches you to fight by kicking Clyde's ass. Afterwards, he takes you to see the Stick of Truth, which they are guarding. Butters comes in screaming alarm and warns of a drow elf attack. Hurry outside to see the drow elves at the gate. You then have to approach each of the three drow elves and hit them, starting combat. After defeating them, the elves retreat, but Clyde reveals that he failed to protect the stick, pissing off Cartman to the point that he banished Clyde from space and time. You are then tasked with finding Tweek, Token, and Craig, and bringing them back to Kupa Keep so you can retake the stick. 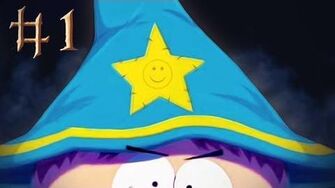