The South Park Game Wiki
Register
Don't have an account?
Sign In
Advertisement
in: Characters in South Park: The Fractured But Whole, Bosses, Enemies,
and 4 more

The Stick of Truth Combatants (The Fractured But Whole)

The Stick of Truth Combatants

In AD. 627, the Land of Zaron has just reunited from a horrible thousand-year war, and a new king rose to power, ruling the entire kingdom. But foes from a distant land had awakened...and it is up to the king to push them back.

When the Freedom Pals go back in time to stop the rise of Mitch Conner, they end up running afoul of the Stick of Truth Combatants (a.k.a. Kyle, Craig, Butters, Clyde and The New Kid's past selves). In order to reach The Coon and his "possessor", the Freedom Pals must defeat Almighty King Douchebag and the elite fighters.

Holographic forms of the Fantasy versions of four of the main heroes team up with other foes during the Danger Deck challenges.

The King of all Zaron, the greatest warrior ever came to existence, the slayer of Dragons, the overlord of the land, Master of Fists, Magics, and Heavenly powers, the true hero of the Kingdom to the North, the undefeatable, the Rightful Owner of the Relic left behind, the only hope of the realm.

King Douchebag wears The New Kid's normal clothes, but also a cape along with gloves. A golden crown is also added as a presentation of the King'a rightful reign of the kingdom. The King has the powers that can damage enemies at an amazing effectiveness, making the King the best ally to have and the worst enemy to face. The King bows to no one but themselves.

Warrior Clyde wears his regular outfit, with the addition of a blue cape and a metal helmet. He wields a sword and a shield.

Thief Craig wears a beige-colored shirt and black pants. He also wears a brown cape and has a sash across his body with pouches. His trademark blue chullo hat with a yellow puffball on top is present with the inclusion of a brown scarf. He also wears brown gloves and dark grey boots. His weapon is a brown staff.

The ruler of the Drow Elves, now willingly serving under the almighty King.

High Jew Elf King Kyle retains most of his regular outfit, with the addition of a crown of twigs over his green flappy hat. He also dons a red robe with gold trim and an intricate pattern over his regular outfit. His weapon is a red ice hockey stick.

A noble Paladin with the power to protect, but also to attack.

Butters The Mercifull wears a turquoise shirt with a yellow shield marking on it and pants. He is also equipped with blue shoulder pads with white outlines and a dark blue cape, and also gold gloves with yellow trim. A rope belt is tied around his waist and a gold circlet with a red gem in the center is seen on his head. He wields a single double blunt-edged hammer.

The invaders of the Kingdom from a distant land, but are also defenders when the Kingdom is in trouble. They are usually seen wearing bicycle helmets over their regular clothes and wielding a single sword and shield.

Guards of the Dark Court

A mighty creature brought over by the Moors, residing in the Paladin's house.

The battle with the Stick of Truth Combatants is an epic five-round affair, with different allies coming in for each battle.

The first opponent to be fought. After taking minor damage, King Douchebag will retreat and let Clyde take over; for the final round, King Douchebag returns to the battlefield with all of the elite fighters, resuscitated by Butters The Merciful. They must be defeated in order to end the battle, but defeating their companions first is also a good idea.

The King's best warrior is the second opponent to battle the Freedom Pals, summoning three Moor Swarmers to assist him. In turn, Butthole's allies will be Mosquito, Tupperware, and Toolshed.

When Clyde falls, Craig will challenge his superhero counterpart, immediately surrounding him with four clones of himself. Wonder Tweek, Fastpass, and Butthole will come to help Super Craig; only Thief Craig needs to be beaten for this phase to end.

The Lord of the Dark Court will enter the fray when Thief Craig is defeated, calling upon a pair of Moor Bruisers to back him up against Butthole, Human Kite, Call Girl, and Mysterion.

The final Fighter of Zaron to engage the Freedom Pals, Butters The Merciful will start the final round by healing Almighty King Douchebag and reviving Warrior Clyde, Thief Craig, and High Jew Elf Kyle. Butthole's original party (whoever was chosen as allies for the start of the battle) will rejoin them in this final battle.

Guards of the Dark Court

The King teams up with Red Wine Drunk Randy, Porcupiney, King Crab, Detective Yates and Professor Chaos riding his Mini Supreme during the "Heavy Hitters" Challenge. Like the allies (Except Porcupiney), The King's abilities consist in dealing a high amount of damage to the enemies.

The King has the same attacks as in the last fight.

The King's warrior appears as a foe during the "Mental Assault" challenge, Teaming up with Two Security Bombers, a Meth Head Medic and a Redneck Sniper. While the Meth Head Medic heals him and the other enemies, these will confuse the rest of the party with their attacks. Clyde will give them protection whenever he has the chance.

During the "Scorched Earth" Challenge, The Lord of the Dark Court will team up with Mr. Kim, a Security Bruiser, his cousin and a Many-Assed Sixth Grader Porcupine. Him and his allies specialize in Area-Damage attacks

During the "Shadow Swarm" Challenge, two copies of the King's rouge team up with two Ninja Summoners. He specializes in making copies of himself and the Ninjas specialize in summoning Ninja Swarmers to the battle, the four of them have to purpose of overwhelming the Freedom Pals with multiple copies and allies.

Ask their King to help them get rid of the Moorish and help the Wizard and the Bard. 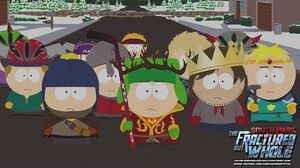