Towel
Towelie is a minor character in South Park: The Fractured But Whole.

Towelie is a light blue towel with white arms and legs, yellow shoes and an anthropomorphic face. In the game, he wears a green apron with pockets on the left and right sides and a logo of a circle with a marijuana leaf inside it.

In South Park: The Fractured But Whole, Towelie works at Medicinal Fried Chicken where he is sober and after explaining his job at MFC, he gets CLASSi's prescription to hand it over to The New Kid and The Coon. However, he notices that the prescription is messed up, which causes him to freak out and start attacking The New Kid and The Coon. They must calm him down by lighting up piles of weed on the shop's floor before Towelie attempts to use his "best attack" on them.

For those who pre-ordered South Park: The Fractured But Whole before its release, Towelie will act as their "Gaming Bud" and he will give advice, tips and tutorials throughout the game (though after Medicinal Fried Fiasco he is too high to offer any meaningful advice).

Towelie may seem to be a hard boss at first (he literally has infinite health and is immune to all status effects) and has two Budtenders as backup, but there is a twist to the battle; there are 4 piles of marijuana scattered around the battle grid, and walking on one while the character is inflicted with Burning will cause it to light on fire and fill the air with smoke, causing Towelie to get more and more high. Once all four are lit, Towelie will be fully high, and the fight will be won. 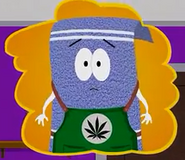 Towelie as "Your Gaming Bud".

Towelie greeting The Coon and The New Kid inside Medicinal Fried Chicken.

Towelie seen "making out" with a customer near Kenny's House on Night 2.