The South Park Game Wiki
Register
Don't have an account?
Sign In
Advertisement
in: Characters, Minor Characters, Adults,
and 16 more

Lu Kim wears a white collared shirt with a red bowtie, an orange vest with City Wok on it, and grey pants.  He has a black hair and has a combover in the center of his head to hide his balding.  When summoned, he wears red, yellow, and blue armor with four black flags and City Wok on the front. 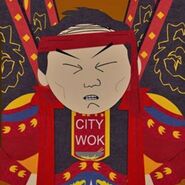 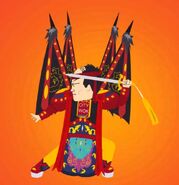 Tuong Lu Kim performing his war dance after being summoned.
Community content is available under CC-BY-SA unless otherwise noted.
Advertisement